The X-Files Strikes Back

My ex-wife was fond of The X-Files. One of a small handful of positive things that I can say about her, but I’m pretty sure it was more tangential to her love of police procedurals than of a love of the weird. Between her reruns and me catching the first few years of the show forever ago, I’ve seen probably every episode at some point or another, but not often or in order enough to really know the story backwards and forwards. I know it turns out there actually were aliens; I know Mulder and Scully had a child; I want to say I remember something about the Cigarette Smoking Man and Mulder’s father, but… and it’s gone.

So in quite possibly the longest hiatus between series since Doctor Who, The X-Files has returned. In some ways, it still feels like the old X-Files. The direction is the same; similar camera angles and lighting, but on much higher quality equipment; and the old gang — most of it, anyway — is back.

As I’ve expressed previously, I respected Gillian Anderson’s portrayal of Dana Scully back in the day, but she fell off my radar for a long time until she resurfaced in Hannibal. Without becoming distasteful, Gillian Anderson, at this point in her life, is a captivating woman, and her portrayal of Scully remains dead-on with an older, more mature version of the doctor and agent we knew years ago.

David Duchovny, however, has not aged as well. Which perhaps serves the character of Fox Mulder, as in the first episode he looks old and tired. So much so that I couldn’t help but worry, when Mulder takes a tumble down some stairs in episode 2, that his hip wouldn’t make it.

Skinner’s back too, as well as a brief cameo from the CSM.

The writing, I feel, isn’t quite as strong as the original series, but it’s workable so far, mixing old-school conspiracy talks with references to modern things such as Uber, Obamacare, and totally-not-Bill-O’Reilly. 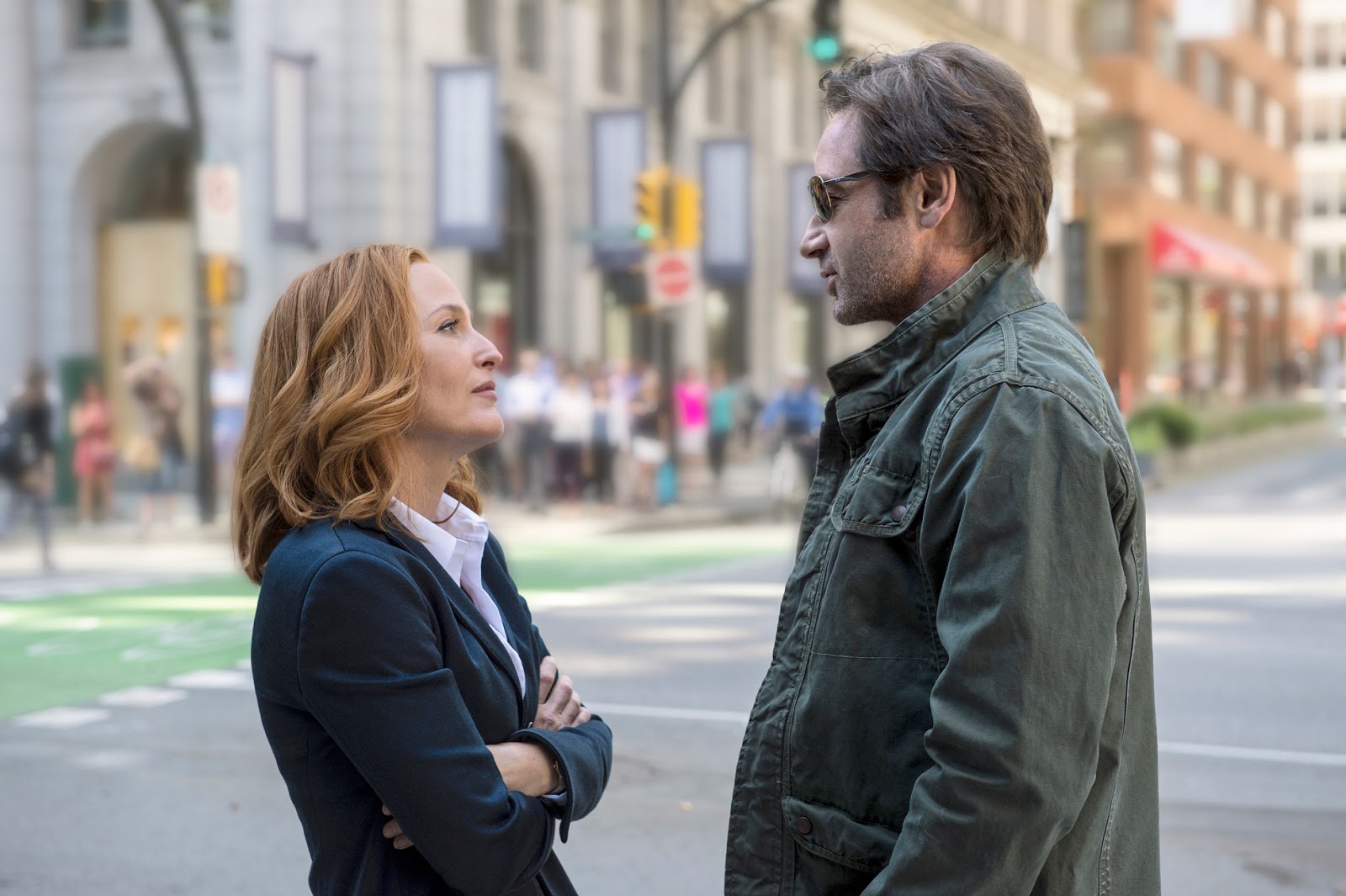 The first episode starts off with promise, and a premise of a woman being kidnapped and impregnated repeatedly by aliens, but after the first act the pacing puts the hammer down and the editor completely loses his mind, fitting what feels like an entire season into two-thirds of an episode. So many interesting ideas, concepts, and characters are introduced and immediately discarded without further development. The most disappointing part is the character of Sveta, who refers to having met Mulder and Scully before as a child, during the events of the original series. I looked her up, and was disappointed to find out that Sveta never appeared in one of these episodes. While that’s hardly a flaw in and of itself, I felt it a missed opportunity and would have been a nice bit of symmetry for Sveta to have actually been a character that had appeared in one of the first few episodes. The appearance by Joel McHale as a conservative pundit obsessed with unveiling governmental conspiracy in a nice blend of O’Reilly and Alex Jones is also fun to watch, and would have made for an interesting recurring character, had the first story had more room to breathe.

The pacing on the second episode is much better, taking its time and letting the scenes breathe a little. The visual effects and makeup work is fantastic as well, especially in the DoD-funded hospital for children with genetic disorders, with some truly haunting disfigurements on display. This one really felt like an old-school episode of X-Files, much more so than the frenetic pacing of the first episode. Mulder, back in his suit and tie, looked much more at ease with being back on the job, and easily 10 years younger than the first episode. The shining moments, though, belong to a pair of dream sequences of “what might have been” showing Mulder and Scully growing up with little William into his teens, moving from idyllic normal lives into their fears of what could come given the circumstances of their son’s origin.

The third episode, though, brings back the charm of some of the funnier classic episodes like Bad Blood (trailer park vampires) or X-COPS (filmed not unlike an episode of COPS). Unlike the previous two episodes of this series which were, in turn, confusing and gripping, this one was fun. Fun and very self-aware. From the opening moments, with Mulder’s crisis of faith explaining away the possibility of a monster with nudists and mountain lions, to the near-farcical moment of losing the monster in question in a port-a-loo, the comedic timing on this one is gold. And yes, this scene is in it. And no, I’m not telling you the context. Watch it for yourself. The episode is completely absurd and completely worth your time watching, even if it’s the only episode of the relaunch you see.

If the remaining episodes can, even if serious in tone, match the pacing of the second episode and the fun of the third, I think this’ll be a triumphant return for The X-Files. If not, and they end up looking more like that haphazard first episode, it may leave a bitter aftertaste for fans of the original. I’ve quite enjoyed the second and third episodes, and they kept me from checking out of this revival early. I’ll see you in a few weeks for thoughts on the next few.