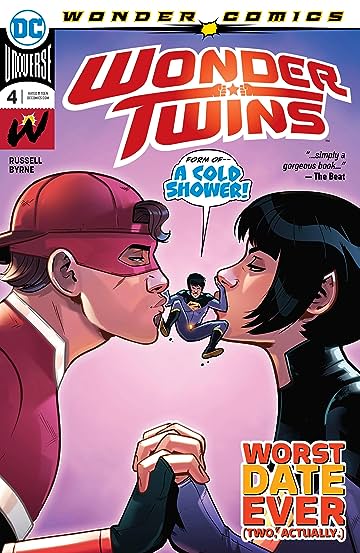 Can I just start by saying wow? The Wonder Twins team has been knocking it out of the park. They’ve managed to ride a very fine line between episodic and serialized stories, with some interesting foreshadowing. At the same time, the whole thing is a light, fun romp.

In issue #4 Jayna’s friend, Polly Math, blows away their school science fair with a presentation on the inevitable evolution of the internet into a living, conscious, being. By the end of the science fair, both Jayna and Zan end up with a date later that night.

Zan’s date goes, well in many ways. They go out to dinner, then a movie. His date ends up going home with her ex-boyfriend, and when he meets Jayna and her date, later in the evening, he says how great it was because he now has a new friend, rather than the likelihood of an ugly high school breakup down the road.

me, and her father encourages her to take up Jayna’s offer to join her at her date’s “work thing”.

As it turns out, Jayna’s date is a supervillain in training, and the “work thing” is the Legion of Doom villain social mixer. Unfortunately, for everyone but the readers, when Polly arrives she soon finds her father cavorting with the villains. Something she does not take well. 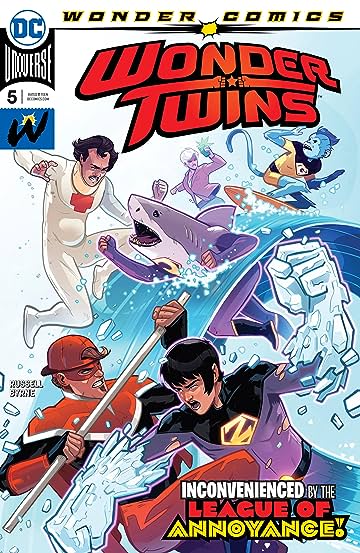 Moving on to issue #5, Polly arrives home to find her father in a conversation with The Scrambler, who was in the midst of telling Filo Math about the good intentions that eventually turned him to villainy. The Scrambler leaves at Polly’s insistence and has a heart to heart that convinces her father to walk away from the League of Annoyance, facing the consequences of that as a family.

When Dr. Math arrived at the League headquarters to pick up some things and gets disintegrated by a screaming Sylvia Cell Phone who thought he was attacking her. This was caught on camera, and most of the issue has her defending herself to the public until finally being “cleared” by police.

The now orphaned Polly Math, contacts The Scrambler who she helps make an ultimatum to the world. Make a better world, or suffer the consequences.

Overall Stephen Byrne’s art continues to impress. I’m still not a huge fan of his portrayal of the more established c

haracters, like Superman, but those characters make little more than cameos. For everything else, his art has been perfectly suited to this book. I have nearly identical thoughts on Mark Russell’s story. I wasn’t sure what to make of the banter from the JLA in earlier issues, but outside of that, this has been one of the best DC titles I’ve read in ages.

4.5 out of 5 stars as I await the grand finale of this mini-series.