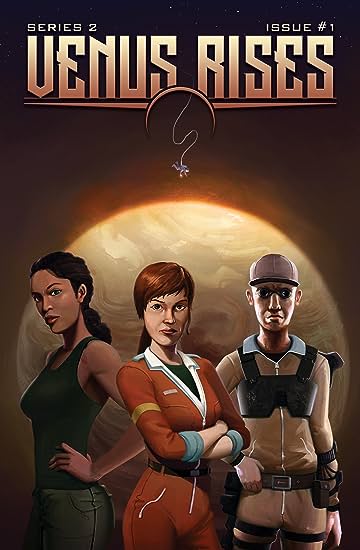 Conceived and Written by J.G. Birdsall
Illustrated by Thomas Garbarini

As I write this I’m in the middle of nowhere with no cell service or wifi. Normally when I review a comic book as clearly marked “Series 2” as this I would try to find out what “Series 1” was all about. That’s not an option, which gives me the opportunity to take this on its own without checking its history, or even the Kickstarter campaign that funded it.

The only history I did get was a “history so far” blurb and a two-page timeline of major historical events. With those included, I was able to at least epic together a bit of what I was walking into. Short version: government and corporations clash, corporations take control of the government. The earth becomes uninhabitable, the working class are sent to the moon to strip mine it while the corporate bigwigs settle on Mars. Instead of bringing the workers to Mars, they shipped them to Venus to toil more.

The first issue splits between a salvage vessel The Cattywompus and the Martian headquarters of the mega-corporation Shirokawa Corp. In space, The Catywompus responds to the distress signal of a ship adrift near Venus. Back on Mars, Hollister Pelt presents a discovery to the Shirokawa executives, that could pull the company out its impending financial doom. Both storyline end in similar results, with a number of details that I can only assume will be revealed in issue #2.

Thomas Garbarini’s art, while not to my personal tastes, is quite good. Even without the context of Series 1, I enjoyed the story that J.G. Birdsall is developing here. It feels a little like watching Star Wars: Episode 4. You know there’s a story that came before it, but you still walk out feeling like you weren’t missing out not having seen, or in this case read, what came before. It’s not an easy thing to write, and he’s done it well.

Again, I have no way to look into the planned release schedule but hopefully it’s coming soon.

When you’re close enough to civilization, you can find Venus Rises ONLINE or on FACEBOOK.