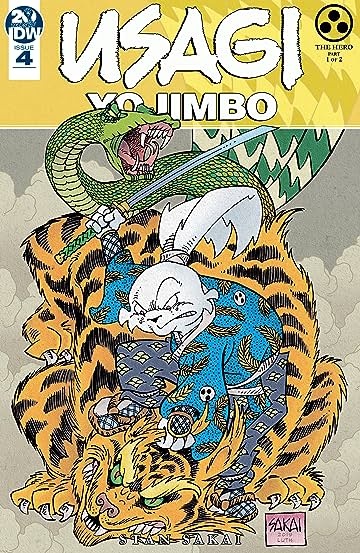 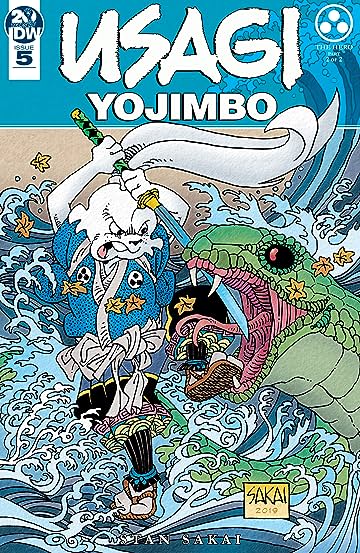 Miyamoto Usagi continues to settle into his new, more colourful, home at IDW with a comparatively short two-part story. The Hero begins with an armour-clad Usagi in a pitched battle against a horde of Shibito Zombies. No sooner does the samurai leader of the undead army attack Usagi when the scene abruptly shifts to a closing book and we realize it was just a story.

Usagi, it seems, met the author while travelling and stopped to read a few pages. The author in question was Lady Mura, whose husband is a high ranking member of their lord’s court. However, during the time of Shogun’s Peace, her husband has little opportunity to gain the accolades he desires. Petty and jealous, he resents his own notoriety being eclipsed by that of his wife.

After a drunken, angry, encounter with her husband, Lady Mura decides to embark on foot to visit her father in another town. As he was travelling in the same direction, and with no real time constraints of his own, Usagi offers to escort her on her journey.

The pair are soon overtaken by a group of her husband’s retainers who demand she return home with them. Usagi quickly dispatches the group, injuring little more than their collective pride.

Eventually, Mura’s husband arrives and the two leave for their home. Mura’s father loans Usagi a horse in return for his help, and soon after he again crosses paths with Mura and Seizo, this time in more tragic circumstances. The second part ends several months later with Seizo’s lord visiting him to praise the writings of his wife.

The Story Notes at the conclusion of part 1 the inspiration of Lady Murasaki Shikibu, author of The Tale of Genji, which is recognized as one of the earliest and greatest completed novels. I can’t express enough just how much these closing remarks add to the depth of the story. They show not only how creative Stan Sakai is, but the dedication he has to the history behind his creations.

Being a two-part story, The Hero is able to maintain a much faster pacing, which I generally appreciate if I am reading only an individual issue our two of a comic. As always, Stan Sakai pens both an amazing story and constantly delightful art. Tom Luth has been working with Sakai on other projects for years, and his colors fit perfectly. After decades of mostly black and white stories, Luth has managed to bring Usagi to life in a way that makes a person forget that Sakai’s wasn’t always coloured by him.

I almost need a separate rating scale for Usagi Yojimbo, as compared to only Usagi Yojimbo. But even with that sort of scale, this story is a 5 out of 5 in every way.