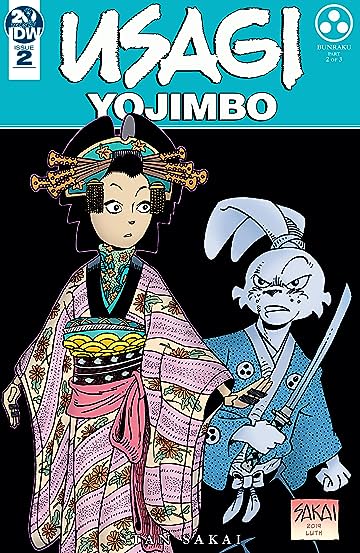 The first full color story arc of the IDW era of everybody’s Anamorphic Lagomorph, Usagi Yojimbo, comes to a close with part 3 of Bunraku. For those of you just tuning in, Usagi Yojimbo recent moved over to IDW Comics, kicking off with Bunraku. This inaugural story is so named after the ancient puppet theatre form that Usagi finds himself enjoying in the opening scenes of Part 1.

But as you might expect when Usagi encounters Sasuke, the demon hunter, things go downhill fast. The two come upon a crown, surrounding a murdered samurai. They note that all of the wounds seem to be on his lower body, almost like he was attacked by children, or something even more sinister. (More sinister than children… <shudder> )

With nothing to do but wait for a better lead, the pair return to the theater to watch the next part of the bunraku performance. While there, a noticeably younger looking Takagi-Sensei appears to regain his sight and sees Sasuke. Sasuke and Usagi return later that night to find Takagi-Sensi attacking another person in the night, draining his life energy. 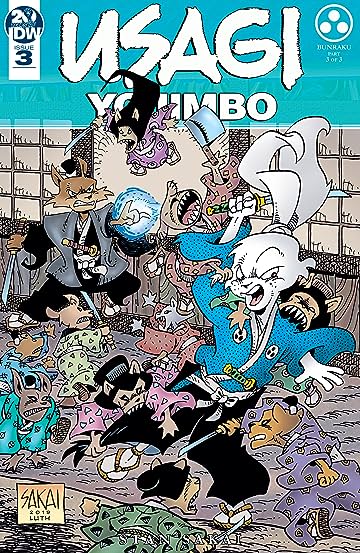 After a battle across the city, Sasuke uncovered the true secret of the puppet master. He had to summon as much of his own spiritual power as he could to finally win the day (or night, really).

And so ends the beginning of a new era. With a new publisher, a new roleplaying game coming out, and an animated series in development, Miyamoto Usagi’s musha shugyō (warrior’s pilgrimage) shows no sign of ending. Indeed, he seems to be on the precipice of becoming a household name.

If you are willing to walk into a long-running, serialized, story you won’t regret it. There’s a reason this character has endured for 30 years. The writing is second to none and the art is terrific. There is really no time I won’t rave about Stan Sakai and his work.

There were some twists I avoided here, and I’m giving this an enthusiastic 5 out of 5, which I almost never do.