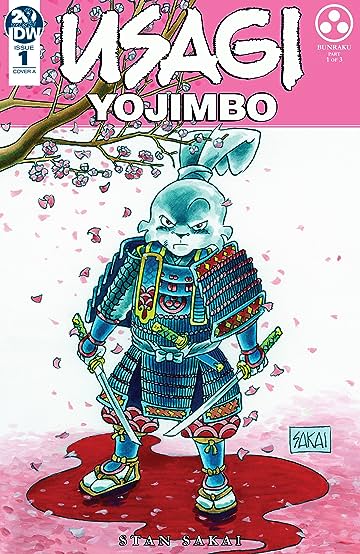 Color me excited. While we are at it, color me some Usagi Yojimbo. In fact, have Stan Sakai’s 30+ year collaborator on Groo the Wanderer, Tom Luth, color it. Now we are ready for the next stage of Usagi Yojimbo’s lengthy existence. The IDW era of Usagi is probably going to be most notable for a few things. First, it will be the first time Usagi will regularly run in color, rather than simple line art. Further, it brings Usagi into the same publisher as his friends, the Teenage Mutant Ninja Turtles. That may or may not result in more crossover stories, but it will make Usagi’s regularly requested appearances in TMNT games, much easier. (Seriously, he won a poll to became a Kickstarter character for TMNT Munchkin on a write-in vote.) The last thing is something I haven’t seen announced before now. IDW will be reprinting the entirety of Usagi’s back catalog, also in color.

So, let’s step into the IDW era. The story picks up nowhere in particular, with the demon queller Sasuke in a pitched battle, before moving to Miyamoto Usagi watching a Bunraku puppet show. One of the performers soon introduces him to the leader of the performance troupe, who invites him to sit for some tea. After leaving, he encounters Sasuke in the street. Noting that wherever Sasuke shows up, bad things follow. The two head off to a local inn, to discuss what evil inhabits the town. Cliffhanger.

The issue closes with a note from the editor, Bobby Curnow, and a page of story notes from Stan Sakai about the history of Bunraku theater. One of the best parts about Usagi Yojimbo has always been its authenticity. Beyond his own personal knowledge, Stan always does extensive research and has taken to sharing many of the details that don’t fit a series of 23-page stories. Curnow also slipped in a surprising and exciting announcement. Apparently over the coming months and years, IDW will be re-releasing the entirety of Usagi’s previous stories, now in brilliant color! No details, just “be on the lookout”. Whatever format they release those stories in, I hope they make note of the originally collected book numbers, since that is how things are notated through the stories.

Life got in the way of me reading this a soon as I would have liked, so I came across a few other people’s opinions on it. One person noted that the story seemed to start in the middle of something and was mostly set up for a longer story, and it’s true. That’s one of the reasons I prefer reading collections rather than individual issues. But what that person is missing is, more than most comics that write for a story arc, is that Usagi Yojimbo has always been a serialized book, even when changing publishers. Several times in this story they reference back to specific events in previous stories, and the title page notes that while this is Issue #1 it is also #239 of an ongoing series. It’s not part of a fad, it’s by design.

I love Usagi. I’ve made that same story arc complaint numerous times, but I think the pacing Stan has mitigates that annoyance extremely well. Although I may just have enough history with the story to not notice as much.