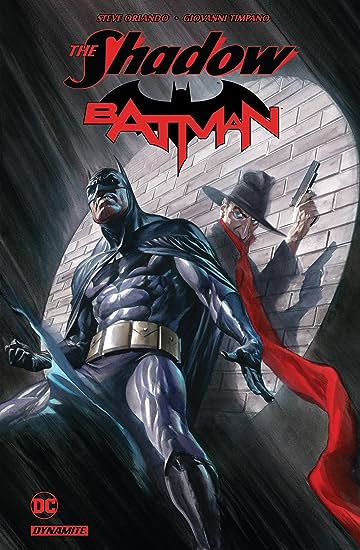 The two six-issue series ran back to back with the first six being published by DC, and the second six by Dynamite. (That’s one way to solve the “who gets top billing” discussion). Steve Orlando was one of the writers on the first series, and the only writer on the second. I have to say that this series was the more enjoyable of the two, at least for me. It felt more unified compared to the previous one. Keep in mind, I read The Shadow / Batman before going back to Batman / Shadow. Even though the backstory is brought up but not clarified (would it kill you to add that little editors note saying see the previous things) I still felt like I knew enough Batman’s history (because who doesn’t) and that I knew enough about The Shadow’s history, to connect the dots. In fact, how the characters accepted their past made the previous series seem even more awkward.

Again, like the last series, we see a villain team up as well as a hero team up. This time it’s Ra’s al Ghul and Shiwan Khan, descendant of Genghis Khan and longtime adversary of The Shadow. At some point in the past, the two long-lived evildoers took control of The Secret Seven (also from the pages of The Shadow) and with it the puppet master strings of the modern world.

The plot in this series is deeper than your average superhero fare. There’s a lot of deep inner struggle that you don’t always get. Batman, The Shadow, and Robin, all go through their own wonderfully interwoven personal journey. By the end, there was very little I didn’t enjoy. I will never understand why, in the middle of a battle at Wayne Manor, Bruce Wayne felt the need to tear off his business suit and change into Batman. (I think your secret identity is already spoiled here Brucey.) But maybe that’s just annoying to me. There are about five pages of epilogue at the end, the last two were great, but the three leading into them just took the entire story, and the story from the previous series, and just sort of tossed out the window of plausibility. It was so far off that it nearly spoiled the whole thing for me as I read it, although I got over it by trying to forget that bit exists.

The collection closed with a page-by-page commentary by Steve Orlando, along with some of Giovanni Timpano’s un-colored, yet still amazing, artwork.

At the end of everything, I’m going to stubbornly deny the 3/5 of the epilogue exists, and give this collection 4 out of 5.

Be sure to checkout DC Comics and Dynamite Entertainment online.