Alice. The Alice. The one who slipped down the rabbit hole and discovered an amazing and dangerous world called Wonderland? Yeah, she had a daughter who made the same trip and barely escaped from that twisted world. Callie is her name, and she is happy leaving that place far behind her. Her daughter, Violet, on the other hand, is sure that Wonderland exists even if her mom tells her otherwise. When she starts to investigate strange reports in the news she finds it: proof that Wonderland is real and that it is stealing children once more. 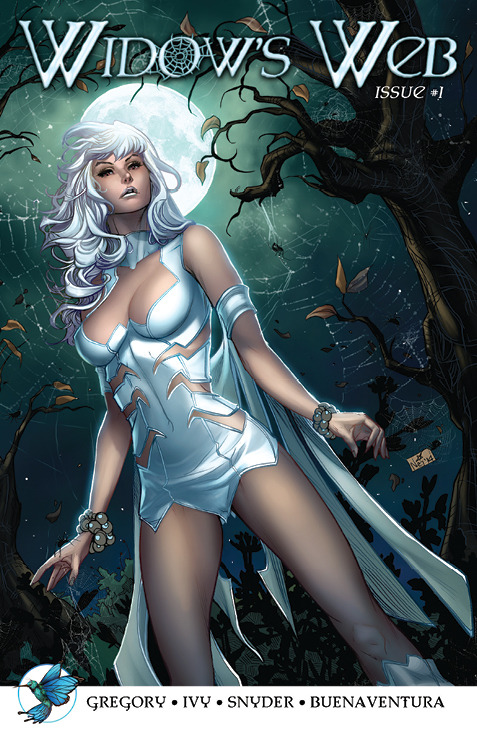 This one is huge folks.  HUGE.  A lot of you most likely know Raven Gregory and his multitude of fantastic books he’s worked on.  Now with his new Broken Butterfly Comics (and your help), he’s looking to get his creator owned title Widow’s Web to the masses.  To get in on the action and see all the awesome rewards, shoot on over to the Kickstarter.

Set in a world that is not our own, the story follows Dahlia White, an unassuming bartender living in the strange yet familiar Tcesni City, where she attempts to balance her normal — and sometimes not so normal — life with the horrifying secret of who and what she really is. A balance that is thrown into absolute chaos when a down-on-his-luck guy, Pterra Atrus, walks through her door and catches her eye, turning her already crazy world upside down. A world where not everything or everyone is what they seem.

Where the fairy tale of boy meets girl ends, and the horror begins.

It is by far the biggest treat to sit down with comics that in were in some way contributed to by friends in the industry.  Just imagine how much more enjoyable it is when the entire series is done by them...

The Secret Life of Crows Feathers Into Flames

I won’t even try to conceal the fact that just getting to read a series created by my wonderful friend Nei Ruffino is a treat in of itself.  The act of being able to then go ahead and do a review of it is the cherry on top.  So, now that I’ve geeked out on the topic, how about we go ahead and move on to said review of The Secret Life of Crows Feathers Into Flames.

We tried not to spill too much in our review of book one, done up by good ol Ross, and I’ll try to follow suit here with book two.  For those who haven’t had the pleasure of checking out numero uno, its approach was that of a superbly creative look at a world most wouldn’t really think about, or care to for that matter...

Earth’s last hope of defense just became lost to the
Shadowlands.  When the Hunters, Sela,
Roman, Elijah, Masumi and Liesel, stop the minions of darkness from bringing
forth a new evil upon the world, they are inadvertently sucked into the
Shadowlands.  Now the Hunters must face
new dangers and atrocities as they battle their way towards the very thing they
were trying to stop on Earth, as well as their way back home.  Written by the talented Raven Gregory and Pat
Shand, this tie-in to the Unleashed event from Zenescope Shows the trials and
tribulations that Sela and crew undergo in order to put an end The Being.
Hunters: The Shadowlands, was a great thrill-ride from
beginning to end.  Just when you think
our heroes were in the clear, some new horror pops out to give them a run for
Read More
1 2 3 … 8 Next »