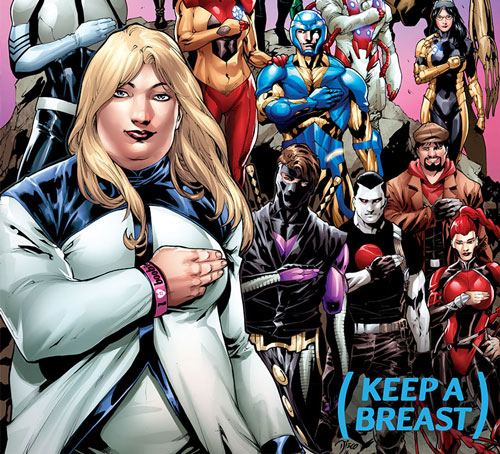 Valiant Entertainment – the award-winning publisher of the largest independent superhero library in comics – and The Keep A Breast Foundation – the leading global youth-based breast cancer prevention organization – are proud to announce a new ongoing partnership dedicated to furthering the California-based non-profit’s ongoing mission with new initiatives in educational publishing, fundraising merchandise, convention and exhibitions outreach around the world, and much more.

As detailed today at Fast Company, the new face of this first-of-its-kind collaborative partnership will be Valiant’s own leading super-heroine, Faith, who will make her debut as Keep A...

SPECIAL EDITIONS, EXCLUSIVE REVEALS AND SIGNINGS PLANNED FOR LAUNCH OF PEEPLAND AND TRIGGERMAN!

OCTOBER 12,MILWAUKIE, OR—
Dark Horse Deluxe announces a brand-new phase of collectibles inspired by one of the most highly decorated franchises in the history of games, Mass Effect™. The first collectible to introduce this series is a limited-edition, large-scale replica of the Reaper known as Sovereign, which will be on public display at the Dark Horse booth (#1528) at New York Comic Con. Set for release on June 26, 2013, this premium replica will be offered at a retail price of $349.99.

Fans can preorder the strictly limited, 18.5” tall replica at the BioWare store today! Each piece will be individually numbered and will include an in-game bonus item for Mass Effect 3 multiplayer*!

This craft is the flagship of the rogue Spectre Saren Arterius...

DARK HORSE OFFERS BUFFY FANS THE CHANCE TO CATCH UP WITH THE CAST OF SEASON 9 IN ONE VALUE-PRICED SAMPLER!
BUFFYVERSE SAMPLER TO FEATURE FULL FIRST ISSUES OF BUFFY SEASON 9, ANGEL & FAITH, SPIKE, AND WILLOW!

OCTOBER 11, NEW YORK, NY—Dark Horse offers fans and retailers alike the perfect jumping-on point for all of the titles in Buffy the Vampire Slayer Season 9!

In 2007, Dark Horse made comics history with a revolutionary new concept: Joss Whedon’s best-loved television series continued in comics with Buffy the Vampire Slayer Season 8. With Joss Whedon himself at the helm, the series launched with much critical acclaim, and sold out of multiple printings.