February 8, 2020 Posted in Geek-O-Rama No comments

In the Garden of Rusting Gods 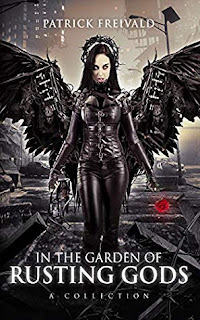 In the Garden of Rusting Gods delivers sixteen tales from the imagination of multiple Bram Stoker Award-nominated author Patrick Freivald. From time travel and broken monsters to glimpses into the minds of honeybees and ordinary people dealing with unbearable loss, Freivald burrows into the weird, dark places that lurk beneath the everyday to unearth twisted stories of our world and worlds that could be.

Freivald’s range is on full display with In the Garden of Rusting Gods. Here lies science, horror, humor, and the weird. Action, panic, and dread. Loaded with energy, you’ll be tapping to the beat from page one. –Josh Malerman, New York Times Best Selling author of Bird Box and Unbury Carol

Smart, funny, intriguing, horrifying; Freivald shows us the wide range of his talents...

The Battle for Ameron

The messenger’s ghostly words tickled her ear and caused the shaking to cease. Mariella’s eyes snapped open. The flame of fear was immediately snuffed out and replaced by something that burned even hotter-the spirit of power, tempered by love, directed by a sound mind. She lifted her chin and stared at the wall of churning blackness. It was then that the lightning struck. She basked in its power, for the lightning was hers. It is here in the depths of the mountain and the heights of the stars that the saga ends. One way or the other, it ends.

This is it! The end of The Ameron Chronicles! I can’t believe that it’s already over! I read this entire series in less than two weeks and now I’m bummed that there wasn’t the next book in the next serie...

The Quest for Ameron

Battling evil does not develop character, it reveals it! That is easy to say when evil is not in front of you, darker than night and as numerous as roaches in a slaughterhouse.

The Quest of Ameron is the fourth installment in the Ameron Chronicles series. It is an epic saga that brings you to the distant past and far future in the blink of an eye — a till filled with swords, sorcery, and advanced science that will make you question what you thought you knew.

Rejoin Thomas, Hank, Mariella, and Thierry as they reveal their character through quests that will change them–and Ameron–forever.

When I said that the action picked up in book 3, I wasn’t joking. What I didn’t realize is that it wouldn’t slow down any in book 4...

The King of Ameron

September 9, 2017 Posted in Geek-O-Rama No comments

It is said that whoever hears the sound of the trumpet and does not take warning, if the sword comes and takes him away, his blood shall be on his own head. These words are from the Ancient Texts so they must be true. The King of Ameron is a tale closer to truth than fiction of a land that has been given that warning. What happens to those who take heed…and to those who do not?

This continuation of the Ameron Chronicles sheds light on a land torn asunder by an evil within, that is no less dangerous than the evil lurking in the shadows. Brothers by birth, bound by the fire of circumstances, Thomas and Hank strive to save a reeling nation. But, to do so, they must accomplish the impossible!

Book three is where this series really grabs a hold of you ...