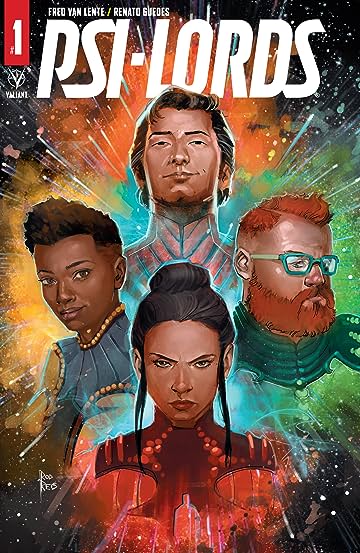 Imagine waking up in a cell. You don’t know how you got there, and you’re not even sure you know who you are anymore. On top of that, there’s a voice in your head telling you that you’re a god.

You escape your cell, and discover you have superhuman powers. Maybe the voice in your head is right. You find others like you, and together you find the man behind that voice. Unfortunately, the man is killed leaving you with very few answers beyond the realization that you’re not in Kansas anymore, or even still on earth.

That’s basically the plot of Psi-Lords #1, but it barely scratches the surface. A little wander around the interwebz, and I find hints at something bigger than just the return of one of the most requested teams in Valiant history. One specific hint I came across said that regular readers of X-O Manowar might have a leg up in knowing what’s going on in the larger picture. If this were one of the Big 2 companies, I could see this as the opening to a companywide crossover event. But on its own it remains a fascinating opening to this story. For me, at least, this is very much a standalone book right now.

I don’t follow Valiant normally. The Valiant Universe RPG is interesting, although I’ve never had time to look deeper than that it exists. When they introduced Faith to their lineup, that was interesting. But I’ve never really had time, if nothing else, to step into this universe. Given that, Psi-Lords #1 didn’t feel like I was coming into the middle of something.

Fred Van Lente has put together a good introduction to the story, that stands on its own fairly well. Renato Guedes’ art is gorgeous, but his style takes some getting used to. If you’re looking for something new and a little different, this might be the title you’ve been looking for.

This one gets a 4 out of 5 stars for me, in the hopes that it stays at the level that it’s shooting at.