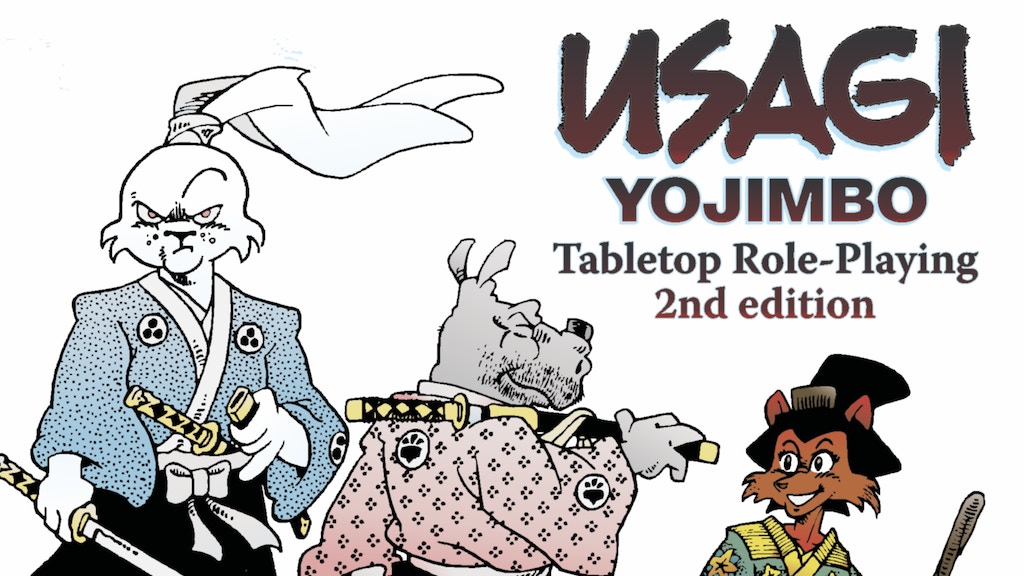 As many of our readers know, before opening The Rat Hole I reviewed comics for Geekorama.net and still do from time to time. If you’ve ever read any of my Usagi Yojimbo reviews there, you might recall that I’m unabashedly a fan of Stan Sakai and his long-eared protagonist.

So you can imagine my excitement when a Kickstarter Campaign for Sanguine Games crossed my desk as I sorted through my post-GenCon campaign pile. I have a copy of the Gold Rush Games’ Usagi RPG but haven’t gotten ahold of the Sanguine game (yet). Now there’s a second edition and it’s Powered by the Apocalypse.

I won’t sugar coat this, PbtA is not a system I have particularly enjoyed in the past. That being said, I can see the benefits of that system for adapting a comic so deeply entrenched in the story and there a ton of people who love it. If anything is going to get me to reconsider my opinions on PbtA it will be this game. So, while my initial giddiness was dimmed, I am looking forward to seeing what comes of this. It’s abundantly clear from the comments section that the folks at Sanguine are fans, and add to that the fact that Stan Sakai is working with them himself and I know this will be the best game it can be.

Here’s a short blurb from the campaign page:

“Usagi Yojimbo RPG: Second Edition has been updated and revised with material from over thirty years of award-winning Usagi comics and the help of Stan Sakai. We’ve overhauled the game to be easier to learn and to be faster to play. You’ll be rolling two six-sided dice, trying to score high. If you fall short of your goal, you may have to make a hard bargain to get what you want. A unique system of story, support, and setbacks lets players work together to solve their problems. Move the plot forward and earn story points to improve later rolls… which earns you support points to help your friends. You’re all in this together”

The pledge levels aren’t complicated. $16 (USD) gets a digital copy of the game, via by DriveThruRPG, and the option to purchase a print version later, at discounted cost. $32 get only a print copy. $45 gets digital copies of Usagi plus Sanguine’s previous PbtA games: Farflung and Madcap, while $299 gets you digital copies of every Sanguine game currently available (so, no Usagi 1st Ed. Sad face.) Both of those levels also offer print copies at an additional cost. Both the digital and print editions are all being handled via DriveThruRPG.

This project funded before they had officially even announced that it had gone live, and the company has a strong publishing track record. There’s not much risk in this not happening. They’ve blown through their stretch goals, with the big one being a colour upgrade to the book. They state they’ll be working with the publisher (IDW) on that, which I’m hoping means they’ll be bringing in Sakai’s long-time collaborator, the amazing Tom Luth.

There’s so much to look forward to in this game. The only thing that could make it better would be Playbooks for the Teenage Mutant Ninja Turtles. I hear Stan might have an “in” there… 😉

You can back the Second Edition of Sanguine Games’ Usagi Yojimbo RPG on Kickstarter until September 14, 2019.

Sanguine Games can be found online at www.sanguinegames.com or on Facebook at facebook.com/SanguineGames.

This CrowdFUNding Spotlight was originally posted to THERATHOLE.CA on August 21, 2019 and is republished with permission.