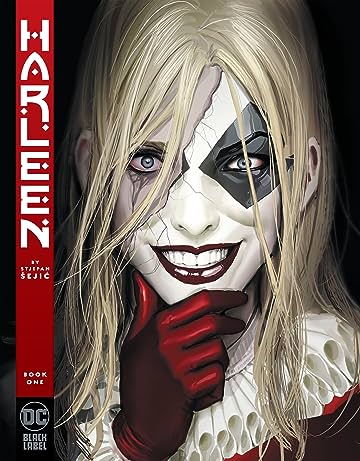 Book 1 focuses largely on Dr Quinn’s journey from pitching her research to investors, to an awkward funding offer from Lucius Fox on behalf of Wayne Enterprises, through to her arrival and early months at Arkham Asylum.

It’s obvious that Harley Quinn is reminiscing on her past for some reason, and creator Stjepan Sejic uses this to deftly drop in comments “foreshadowing” her criminal future,  along with straight up images of it.

Although he’s written perfectly, I’m not sure I love the visual design of this Joker. But that may actually be the only thing I don’t like in this double sized book. Every panel is a delight to behold. I’ve never been a huge fan of Harley. It is truly inexplicable how a mediocre caricature of a side kick could become as huge as she has.  Obviously she’s evolved over time, but I rarely enjoy her. Take that opinion in for a moment while I say that, cover to cover, I really enjoyed everything about Harleen so far.

I am shocked to see my finger type out that this was an easy 4.5 out of 5 for me.