From the Vault: Doctor Who: The Gallifreyan Lament Configuration

Pardon while I don my tin-foil fez…
A week or so back, I messaged a friend, ranting nigh-incoherently about hair and jumpers. I’d noticed something off, and it triggered a few memories regarding previous episodes. I’d noticed that Twelve’s previously unkempt hair and ratty jumper were gone, and he was once again immaculate in waist-coat and finely-groomed hair. Why didn’t he know how the Confession Dial worked? Why was it important now, after going unmentioned since the first couple of episodes and for that matter, who was he talking to when he was playing guitar and talking about Beethoven and the Bootstrap Paradox? Why did he say “Longest month of my life” when Clara referenced him thinking she was dead? Something is off, and I suspected we were seeing events play out of order again. Which led me to one conclusion:Clara Oswald has been dead this entire season.
At least from the Doctor’s point of view. And after this week, I feel that I’m still right.
We learned what the Confession Dial is: it’s a Gallifreyan interrogation room, a personalized prison and puzzle box. And in the course of the Doctor working out this particular puzzle, we get something that I’ve wanted to see specifically since Capaldi started and generally for much longer: an episode with just the Doctor. And did we ever get that.

The image of a badly burned and blistered Doctor dragging himself by his fingernails is not something I thought I’d see, let alone him killing himself just so he could live the cycle all over again. But he was clever. Left himself a clue so that he could make progress in the puzzle, which is probably not something his captors were suspecting, even if it took two billion years to do it. 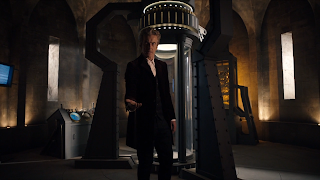 Capaldi’s performance here has cemented his place in Doctor Who history, if it were not already so. Three of the four previous episodes have had truly shining moments in his performances, and now he’s surpassed even “Everybody Lives”. Steven Moffat borrows heavily from another property for this episode, taking the Doctor into his own Mind Palace as he did Sherlock Holmes at the moment when Mary Watson shot him and his body was shutting down. The difference here is that whenever the Doctor is in danger (and not just dying) he thinks quickly. Very, very quickly, as he retreats into a mental version of the TARDIS, and depends on the one thing that’s kept him going for a very long time: his companions asking him questions.

This is the perfect excuse to bring Clara back, perhaps for one last time, to give the Doctor one last stern order: Get off your arse and win. I wonder what strings Moffat had to pull to get the BBC to allow swearing on a family show, pre-watershed at that, but honestly I’ve been waiting for Clara to swear for some time now… she strikes me as the type to do so. (Repeatedly. With much imagination.)

But you have to read between the lines a lot in Doctor Who. The kids are watching, after all, and it wouldn’t do to have a companion with, say, a ton of emotional and abandonment issues to be a stripper. No, she’s just a kiss-o-gram.

Always read between the lines. The story’s much more fun that way.

Which brings us back to my theory: Clara’s been dead for a long time now. Certainly since before the beginning of this season, which is why the Doctor’s in a funk and why he’s dressing down. The Confession Dial’s first proper appearance was this episode. We know it was given to Ohila of the Sisterhood of Karn (as seen in the Season 9 Prologue), who will most likely hand it off to Missy, at which point it will return to his possession, only to be given to Mayor Me/Ashildr. Until now we assumed that the prologue took place before this season started, but now I suspect it takes place between this week and next week’s episode, or even after next week’s episode. Who has the dial after Me/Ashilder is anyone’s guess. As for Clara, there’s production photos of her in a waitress uniform floating around the internet, so we haven’t seen the last of her. But it’s entirely possible that her erratic travels with the Doctor could be in part to him intruding on her timeline as far back as last year’s episodes, as the ratty jumper and hoodie have made appearances previous to this season.
My fingers are crossed that I’m right, and I’m genuinely eager to see what goes down on Gallifrey next week.