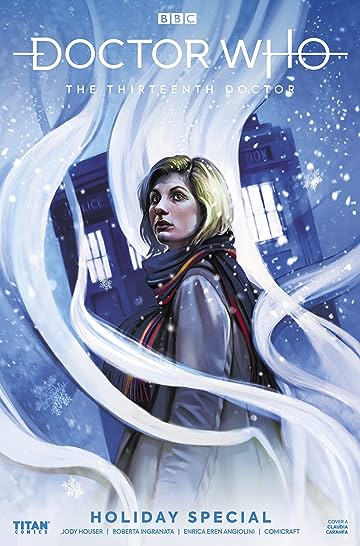 For the first year in several years, Whovians around the world will not be gathering ’round their television set in their Christmas pajamas to watch another Doctor Who Christmas Special. They only have to wait a few more days for New Years Day, but still…

HOWEVER, there is a solution that does not involve real-life time travel. That solution is Titan Comics’ Doctor Who: The Thirteenth Doctor Holiday Special #1!

The issue opens as The Doctor and her three companions realize they all have different memories of one particular planet, or even what that planet is called. Even more unsettling, is that the TARDIS has no record of where they were that day. But when has the complete absence of any information ever stopped The Doctor? In fact, the more work someone puts into keeping The Doctor away, the more likely she is to show up.

Sure enough she retraces her steps to a planet that is more than surprised she came back after their last encounter with Mr. Henderson. The Doctor gets her new-for-the-second-time friend to tell her everything she was told on her last visit, and everything she probably should have been told.

Upon arriving at Mr. Henderson’s complex, the travellers are quickly ushered into a dungeon where the story is to be continued. WHAT!? Holiday Specials don’t have cliffhangers! Argh!

Well, I guess we’ll just have to wait for part two. Hrumph.

The pacing of the story felt a bit odd to me, although I suspect that’s only because this is a comic, not the television show. Just to muddy it further, I’ve been binge-watching the Third Doctor’s four to seven episode story arcs which are paced different again. Overall though I think writer, Jody Houser, did an excellent job capturing the still-developing personalities and group-dynamic of the cast. Roberta Ingranata’s art is good, but more eye catching were some of her panel layout choices that were unusual and yet fit the tone perfectly.

I still wish this had been a single, double-sized, issue. But it’s still a solid 3.5 out of 5 for me.

You can learn more about Titan Comics ONLINE or on their FACEBOOK PAGE.