The Legend of Oz: The Wicked West #9
Writer: Tom Hutchison
Artist: Alisson Borges
Cover A: Alisson Borges
Cover B: Nei Ruffino
A & B covers ship 50/50
Hop on board as we delve deeper into the mystery behind the Emerald City mines.  The excavation at the Emerald City has picked up steam, but Dr. Pipt isn’t sure he can be part of it any longer.
$3.50 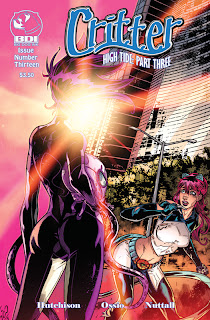 The In Crowd #1
Writer: Eric Esquivel
Artist: C.B. Zane
Cover A: C.B. Zane
Cover B: Corey Knaebel
A & B Covers ship 50/50
As Tidepool begins his epic destruction of the United States, a group of young heroes takes the scene by storm — with their cameramen in place to get their good sides on film! From the pages of Critter, The In Crowd mixes the fun of superheroes with the ridiculousness of the reality TV craze. They’ve got great hair, great bodies, and great power. But great responsibility? Not so much!
$3.50

Serusis #1
Writer/Creator: Tom Hutchison
Artist: Owen Gieni
Cover A, B, C: Owen Gieni
A, B &C Covers ship in equal quantities
Welcome to Serusis. A planet merely thousands of years old, and one that has just been taken over by a hostile force. Relitons swarm the planet’s cities and their leader, General Snogard, will not stop until he controls the planet and the name of Asta is once again feared by the Serusian inhabitants. Big Dog Ink’s first all ages book brings the excitement and adventure of a science fiction story and mixes it with fantasy and art reminiscent of some of the best animated cartoons of the 80’s. There is something for everyone in this comic as four humans are abducted and called to action to help the Serusians take back their planet!
$3.50

Ursa Minor Trade Paperback Vol. 1
Writer/Creator: Tom Hutchison
Art & Cover: Ian Snyder
2022. Werewolves are an endangered species. Vampires are mankind’s saviors and one girl with a power she can barely control is determined to return the supernatural balance that nature had intended. Tom Hutchison, creator of Penny for Your Soul and Legend of Oz takes the concepts of lycanthropy and vampires, as well as the dark sides of human beings to new levels. And don’t forget the werebear!  This trade paperback collects the SOLD-OUT 6 issue mini-series.
$17.99
About Big Dog Ink
Founded in 2009, Big Dog Ink is an independent publisher of diverse comic book properties such as PENNY FOR YOUR SOUL, URSA MINOR, CRITTER, KNIGHTINGAIL and REX: ZOMBIE KILLER.  Since its inception, Big Dog Ink has quickly become a top publisher in the industry with its hit series, THE LEGEND OF OZ: THE WICKED WEST, which has consistently charted in the “Diamond Top 300” list.  BDI has gained a loyal fan following due to our high quality art, stories and dedication to elevating the art of small press and creator owned publishing.
Tags:  big dog ink, Comic Books, comics, Critter, Ian Snyder, indie comics, June Solicitations, June Solicits, Press Release, ursa minor