Going to the Chapel #1 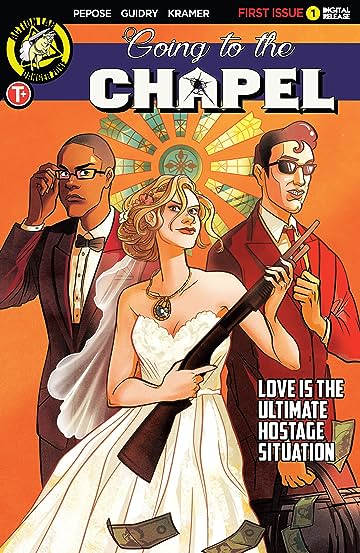 Sometimes we forget that there is more to comics than Archie and Superheroes. (Yes, I completely believe that “Archie” can stand on its own as a genre and not just a company or character). It remains to see exactly what genre Going to the Chapel will become (although the tagline “love is the ultimate hostage situation” may be telling) but it’s very much not those two.

The issue opens, as you might expect from the title, with a wedding. Panels shift between the bride and a gang of bank robbers watching from a distance, all set to the lyrics of the famous 1964 song that this series takes its name from.

Flashback to earlier in the day...

If you didn’t get to read issue #1 of this series, you may not be able to imagine why I’m pushing an issue #2 Kickstarter. It’s simple. It’s because it’s awesome. Aliens, underground bases and more…How can you resist? Honestly, if you love creative comics done with great art, this book is one that you want to check out. Don’t miss it. Head over to Kickstarter to pledge today! Less than 2 weeks left!