Dr. Horrible and other Horrible Stories 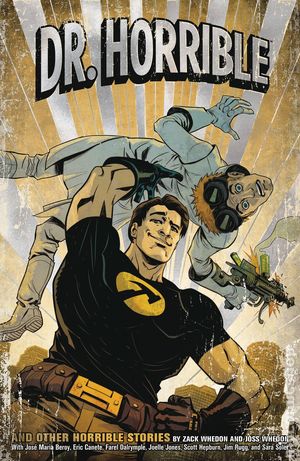 Letters by: Nate Piekos of Blambot®

It doesn’t really seem like it’s been 10 (technically 11 now) years since Doctor Horrible’s Sing-Along Blog. I would argue that this three-act wonder jumpstarted an entirely new business model for online entertainment.

This is the second edition of Dr. Horrible and Other Horrible Stories. The first edition consisted of three previously digital-only stories: Captain Hammer: Be Like Me, Moist: Humidity Rising, Penny: Keep Your Head Up, plus the one-shot Dr. Horrible, and the story Evil League of Evil, all written by Zack Whedon. This second edition adds to that the newest one-shot, Dr. Horrible: Best Friends Forever written by Joss Whedon.

The first three stories are completely stand-alone, but cleverly overlap at one specific point (despite being released nearly a year apart). The third story, focusing on Penny, ends in the Laundromat where she first talks with Billy, aka Dr. Horrible.

The Evil League of Evil is an excellent short story that takes a variety of characters that were little more than side notes, throwaway lines, and plot devices in Doctor Horrible’s Sing-Along Blog, and fleshes them out just a little, to create an entertaining glimpse into the League and the superpowered city beyond just Dr. Horrible and Captain Hammer.

I love Dr. Horrible. But at the same time, I dislike one-shots and I hate short one-shots. All four of those fun little stories, while fun, do not even have the page count for two regular sized comics. They are nice, little, snack-sized bites, that don’t really have any meat to them. They all technically funnel into the start of the show, but they could have done more. They could have BEEN more.

The Dr. Horrible one-shot was longer, at least, but had its own set of problems. It attempted to add another layer to the online stories, but in doing so, it somehow managed to retcon out Moist’s first meeting with Dr. Horrible, which was a full quarter of that particular story. I feel like that may have been an honest continuity oops, with enough blame to go around for it.

The last story, Friends Forever, is the only tale that takes place after the end of the show. It is also the only story by Joss Whedon, himself, and the strongest story of the collection. Without spoiling the story, it’s a very strange read, then you get a good foreshadowing hunch, then the big reveal and a not quite expected ending. It also does great work in expanding the universe around the characters, rather than zooming in on the background of the universe that’s already there. It introduces new concepts and new characters and left me largely satisfied, yet still wanting more.

The collection closes out with a reproduction of Joss Whedon’s script for Friends Forever. Sometimes a behind the scenes look at how a comic is created is really interesting. Other times it just feels like marketing filler, especially when added to a new printing of an existing book. I feel like it splits the difference on that here. The first edition of Dr. Horrible and Other Horrible Stories was first printed in 2010, and didn’t have a digital release until 2015. They missed the 10th anniversary of the show. (Although the first printing of Friends Forever covered that.) But that story only dropped six months ago, and I just saw a copy at my favorite comic shop, just a few weeks ago. I feel like they could have waited a few more months for the 10th anniversary of the first version of the book. I also think they could have done a better job at noting this was second, although expanded, printing of it.

I’m torn between my love of the content, and my disappointment there’s not more content. Since I have to give is a number, I think I have to give 3.5 out of 5 stars, with the caveat that I’m glad this exists at all.